skip to main | skip to sidebar

Last week,a volcano eruption in Iceland sent ashes across many parts of Europe,disrupting all the flights around the world!Thousands of passengers have to cancel or change their holiday plans, many of them stuck wherever they were without flights to bring them home.I was so glad then that hubby wasn't still commuting between Asia and Europe else he would be in a difficult situation.
Yesterday,he was supposed to get to work but there's no chopper for him so he can't do any check in,he left for the airport at 5.30am and by 9am he was back home.
This morning,again,he left for the airport at the usual time, choppers were around but they were unable to take off as they were checking on the density of the ashes in the air or whatever so hubby and his colleagues waited at the very packed airport till it is safe to fly.Luckily,by 10am,his company has arranged for them to relax in the function room of a nearby hotel,lunch was served to them as well,that was nice of the company and then by 4pm, he had arrived at work.
So now,I am alone in our bed,missing him terribly and updating my blog.
For the past 2 weeks when hubby was home,we were kept busy with building up the shed,mixing cement,getting the wood,etc. Seriously,I don't remember much of the last 2 weeks,time just seems to fly by whenever we are together. I was always kept busy with my fleece washing,drying and then last Saturday,attended the Spinners and weavers guild.Hired a drum carder for 2 months and carded some raglogs on Sunday,came out rougher than the tops available commercially.However,it is interesting,next thing I wanna do is dyeing.
Posted by 雪 at 4/20/2010 No comments: 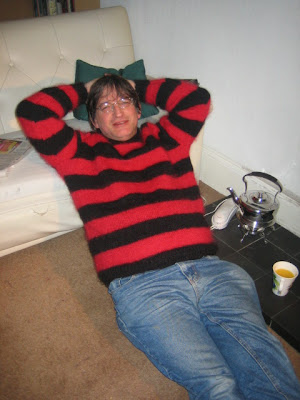 21st March 2010
Hubby revealed that he wanted a red and black striped pullover with material similar to the one that his mum knitted for him when he was little.Checked with MIL and found the perfect shiny red he wanted,mohair.

22nd March 2010
Ordered from Texere yarn,arrived in 3 days, gorgeous colours and easier to knit,compared to other mohair that I’ve used.

25th March 2010
Received the yarn,using a plain Aran jumper pattern,changing colours every 16 rows,started the project in the evening.

2nd April 2010
Started on the sleeves

4th April 2010
Not enough black colour,ordered another cone online but due to the Easter holidays,will probably receive it on friday.In the meantime,it is hidden till the yarn arrive and I can hide somewhere in the house to knit

10th April 2010!!
It is completed!!
Did the sewing and weaving today,what a relieve and I told myself,no more jumper for hubby if he doesn’t like it.
Currently being hidden,will take a pic of him wearing it and post it here.

13th April 2010
It is The Day!
Hubby is absolutely delighted with it and I am pleased!It is worth going without much sleep and the aching in my fingers and back! 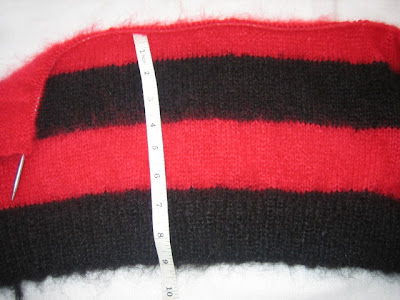 2 weeks to hubby's birthday,I just started knitting the back on Thursday and to-date,I only have this - 9 inches!!!!
42 inches to go ,not to forget there's the front and sleeves to knit!
Better hurry!!
Posted by 雪 at 3/27/2010 No comments:

Hubby's birthday is in 3 weeks and have been at a loss on what I should get for him.
Finally a few days ago,he requested for a striped jumper, red and black,in chunky mohair similar to Dennis The Menace pattern. Just bought the mohair wool from Texera Yarn,the colour is simply lovely.Hopefully the yarn will arrive soon and I can get started on it immediately.

Called Texere Yarn this afternoon regarding shipment,I ordered the yarn last night and was expecting them to be delivered by tomorrow by Royal Mail 1st class.However, according to the staff who answered my called, my order has been dispatched to the warehouse to be processed and so the earliest that they can send out my order will be tomorrow and I will probably receive them by Thursday or Friday.What a let down!

The past 3 weeks was like,a little honeymoon where we were like newly weds, we still are,lots of kissing,cuddles,being alone together and having total quality time.
We left on a Friday to go to Fife to watch The Skids concert. It was a 2 day performance, in Glasgow on Friday and Dumfermline on Saturday. Like what one of the concert goer said, for a bunch of old guys,they were pretty good.I guess that sum it up. For a band that has been around for 32 years, their last album was at least 10 years ago yet they have a huge gathering of fans,my hubby is one of them.Seeing all the fans dressed up in T-shirts with The Skids printed on it,dancing and singing together,words are simply insufficient to describe how high the people were those 2 nights.
On Sunday,we had a walk around Edingburgh before driving down to Durham, Newcastle, Kent, Essex and then London, Norwich. I swear my bum feels at least an inch thinner!!
We went to Norwich to collect a spinning wheel that hubby bought for me as an early birthday present. Sort of has a growing interest in spinning,started off with spinning on a spindle but it is too stressful on my left arm and hence the spinning wheel. Although I was told that it is a dying art and there are always lot of them on sale on Ebay but the prices are never less than £90 for a second hand,we paid much more than that.Of course,it comes with the extra accessories too.
Went to a Spinners and weavers guild workshop yesterday,very interesting,joined as a member and picked up latch hooking where you can make things like rug,table mats etc. A lot of the ladies there have their own sheep and shear them for spinning,wow.Wonder whether I will be getting a sheep next year.Ha ha.
The process of shearing the sheep to cleaning ,carding and colouring the fleece before spinning is a little too much for me.I have bought some white roving tops and coloured ones,I think in future I will simply buy the coloured ones.Makes life easier.
Been collecting wool around the fields near our home with hubby in the last few weeks,rather interesting.Will wash them and spin them in the summer.
After we have left Norwich,we went to Wolverhampton to visit hubby's cousin and his family.We stayed 5 nights in a hotel nearby,spent most time with the family with hubby chatting to the cousin and I cooking for the family.I cooked things like Cod fish curry, panang curry beef, egg omelette, ba-ku-teh, fried rice,chinese salad,etc and they love it. Ate up everything. It is a great compliment to the cook,yours truly.
Had a haircut at the cousin's wife's salon. Forgot to mention that had 2 pairs of glasses prescribed in Fife,my eyesight has worsened by at least a 100 degree each side!
The children have grown so much taller and bigger.Emily is getting more beautiful,she is now working as a chef in a pub and is also a part-time model. Edward is now 17,so handsome and has signed up for the army.Alicia,same age as Shane,is as cheeky and active as ever,love to sing,dance and talk.All of them are really sweet kids.
Ate a lot on the trip,lots of KFC, came back with a sore throat and extra 2kg.Got to try to get rid of the excess baggage soon.
Hubby was very sweet to me throughout the 2 weeks on the road and remains so when we came back,hope that stays on.
Posted by 雪 at 3/21/2010 No comments: